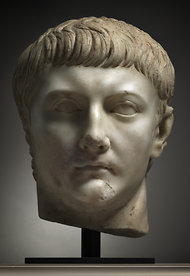 The marble head was sold to the museum by Phoenix Ancient Art, a leading antiquities dealer in Geneva and New York that does business with many major museums.